There is nothing more important when gun handling than being scrupulously safe at all times. It’s no fun being a bad shot, but it’s a disgrace to be an unsafe one. Ultra-safe behaviour is mandatory at the shooting range, where any transgressions will mean offenders being banished, probably for all time. And so they should be, because mishandling a gun doesn’t just break a rule, it threatens lives.

But safe gun handling is a requirement wherever you happen to be, not just in the field or at the shooting range. A gun is just as potentially lethal in your house, in your car or in your driveway as it is anywhere  else - always treat it as such. Just because you are alone does not  mean safety rules can be relaxed - each year people are killed or injured by their own supposedly unloaded guns.

Rule One The most important rule is to treat every closed gun as though it were  loaded. In fact, since no gun should be carried closed unless it is loaded and ready to shoot it’s fair to assume that a closed gun is loaded. At Total Shooting we call a closed gun a Live Gun, because that’s how it should be regarded. Never allow a closed gun to be pointed at or near anything you would be unwilling to kill or damage. Never tolerate a closed gun  being handled carelessly by another. There are no rules in society that demand you stand by and say nothing when someone is being unsafe with a gun, whoever they may be.

Rule TwoWhenever a gun is handled it must first be opened and checked to make sure it is not loaded. This is a rule frequently ignored when guns are removed  from racks for inspection, or removed from gun slips. Do you withdraw your gun fully from it’s slip before opening it and checking it’s unloaded? Yes? Then you probably transgress Rule One each time you do it.  Do you take guns from gun racks without opening them immediately while they are still pointing vertically? Many people don’t bother to open them at all when trying a gun in a shop or club house.  A tragedy waiting to happen, but impossible if Rules One and Two are observed.

Some years ago I was in a club house when a foolish person shot someone at very close range, having played with a gun that had been placed loaded in a  rack.  A combination of unforgivable errors made this possible, and the shot person was very lucky to survive.

All gun safety rules stem from these two main rules

It can be educational watching people withdraw guns from slips. The careless (and potentially dangerous) pull the closed gun from the horizontal slip, usually pointing it at several people in the process, then they open it.

The safety conscious do it like this. With the slip and barrels of the gun pointed vertically down at the ground the gun is withdrawn until the action is visible, with barrels still pointing straight down. The fore-end of the gun is grasped through the slip (as illustrated) the top lever is then operated and the gun opened. Now the gun can be fully withdrawn open from the slip having at no time pointed at or near anyone. Reversing this procedure safely replaces the gun in its slip. 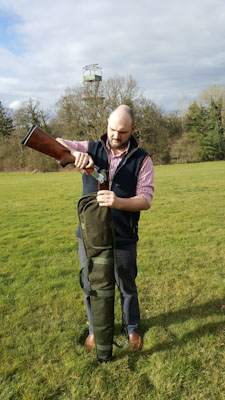 Withdrawing the gun safely from its slip 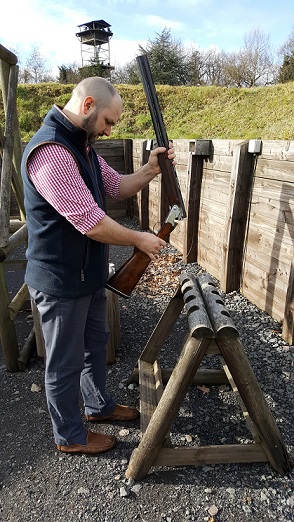 We’re assuming here that the gun has been correctly placed in the rack,  barrels pointing upwards. The gun is removed from the rack, barrels  still pointing vertically. The top lever is now operated and the gun  fully opened. The barrels are inspected, still pointing upwards, only  then is it safe to handle the gun. When replacing the gun in the rack the  barrels should once again be checked clear, then the open gun is turned  with the top rib facing the rack, barrels pointing vertically. Now the  gun can be safely shut and placed back in the rack.  At no time in these procedures is anyone covered by the closed gun.

Safe placement and removal of the gun from a rack 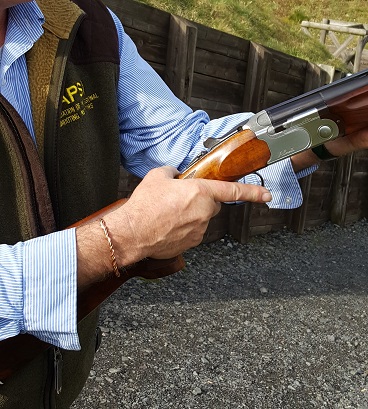 Index Point for the trigger finger

A second Index Point for the trigger finger

Many shooters and coaches prefer this second position as it acts as an extra protection for the trigger, especially when walking with the gun through woods and undergrowth.

This safety catch drill will mostly apply to game shooters. Clay shooters rarely, if ever, employ the safety catch as they only load the gun when ready to shoot. 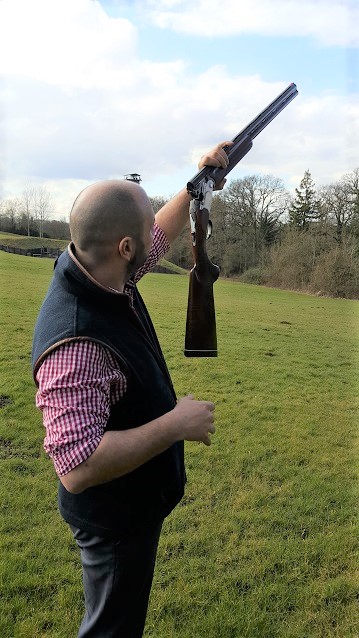 Having arrived at a shooting stand or on the peg, always check the barrels are clear before loading the gun.

Firing the gun with the barrels obstructed can damage the gun and the shooter. Check first. 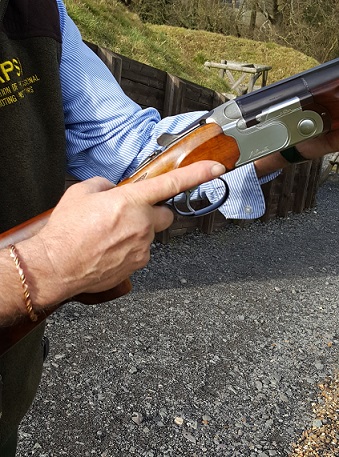 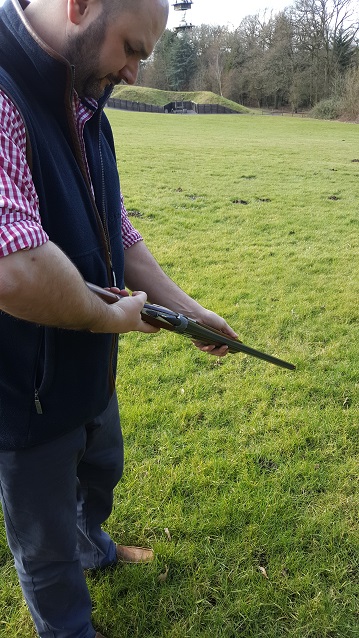 Once the gun is loaded it is closed with the barrels pointing into the ground about 1 - 2 metres ahead of the shooter, facing the safe firing area. While closing the gun the trigger finger is kept away from the trigger, on the Index Point

These are the major safety points but there are others, all based on simple commonsense and observation of the Two Basic Rules.

Always remember: No one minds a poor shot - no one should tolerate an unsafe one

When dry-training with the gun always observe all safety rules and regulations. Select a suitable area where there is no chance of  accidentally pointing the gun at person or animal, and where you won’t  have an Armed Response Vehicle speeding to your address following the  call of an alarmed neighbour.

If during dry training you put the gun in the rack for a moment, then open and check it before putting it there and open and check again before  resuming training.  Too fussy?  If you think so then you may well join  that select group who have managed to blow holes in their ceilings,  their floors, their furniture, their dogs and worse, with guns they ‘’just knew’ were unloaded.