Those familiar with rifle shooting often find it difficult in the initial  stages to come to terms with the quite different philosophy behind the  use of the shotgun. Quite simply, a rifle is a long range weapon firing a single projectile, and is deliberately aimed using either open or  telescopic sights usually at a stationary target. Depending on the  calibre its accurate range can stretch out to 1,000 metres and more. The shotgun is effective at much shorter distances, with 40 metres  considered a long shot and 25 metres a more typical range. It is fired  almost invariably at moving targets, and its pattern of shot spreads  gradually as the range increases.

Focus the target
Unlike the rifle the shotgun is used much more instinctively. Indeed, among  sporting implements the rifle might be considered the odd man out. In ball sports the focus of attention is the ball, never the instrument with which it is to be struck. The shotgun employs this same principle: it is the target on which the eye focuses, never the gun. How does this work? Eye and hand co-ordination is the answer, coupled with correct  training, the same as in a ball sport. Wouldn't it be more effective to  aim the shotgun like a rifle? No! Many beginners struggle to accept the idea of focussing the target rather than the gun. However, once the penny drops and targets begin to break with some regularity the thought  of deliberate aiming soon fades.

In the early stages of a shotgun shooting career it takes a degree of faith to believe that this can  work. At first it doesn't make much sense. However, provided the gun is used as the coach advises it will soon begin to point where the eyes are looking.

For further information on eyes in shooting see Dominant Eye

Stance
A good stance allows easy movement to the left, right, up and down, while maintaining perfect balance. This is not quite as easy as it sounds,  and learning it properly is one of the keys to good shooting. What is perhaps surprising is the relatively small arc of swing in which most  shots are taken. Other than in shots taken behind, as are occasionally encountered in the game field, few shots require an arc exceeding 90 degrees. Most are a good deal less.

A sound stance starts with good foot positioning. Below are some examples

The Basics of Shotgun Shooting

Done correctly a good stance allows the shooter to remain centred, both  physically and mentally. Because it is so important it forms the basis of several training drills that are fundamental to Total Shooting coaching.

Mounting the gun properly
It is not an exaggeration to state that the majority of shooters mount the gun less than perfectly. It’s not just the position of the gun in the shoulder and face that matters: how it gets there is just as important.

Sort the address position first
It’s difficult to mount the gun properly if the address (ready to shoot) position is wrong. 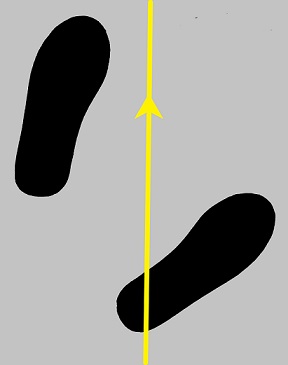 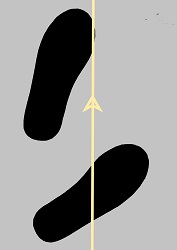 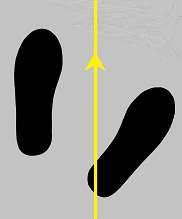 The Stanbury foot position was devised and used by the late Percy Stanbury, head coach at West London Shooting Ground. He advocated placing the majority of the shooter’s weight on the forward foot, regardless of the direction of the target. Left, right or high overhead, weight remained on the front foot. This has to be put into perspective. Stanbury was a great shot but also a slim and flexible shot. But if you can do it it is a very effective and elegant way to shoot.

So which is the best? The sitting-on-the-fence answer is that the foot position has to be suited to the shooter so there is not a ‘best’, there are great shooters in all camps.

GB Shooter, Clive Bramley, demonstrates a great address position, preparing for a left to right target. Stance, balance and posture are nicely neutral. Most importantly the gun is positioned so that the rib is directly under the dominant (right) eye, ensuring the gun mount has every chance of succeeding.

The muzzles are held at the level where the target is expected, never casually allowed to drop down to the ground. The dropped muzzle position is one that many game shooters are guilty of, making good shooting almost impossible.

The turn and mount are ‘one piece’, eye/rib relationship still correct, the muzzles right up there with the target, tracking dead on line.

The gun is fully mounted and immediately afterwards the shot is fired with no stopping or slowing of the gun until after the shot is away. Note that the gun is brought up to the face, never the face down to the gun. 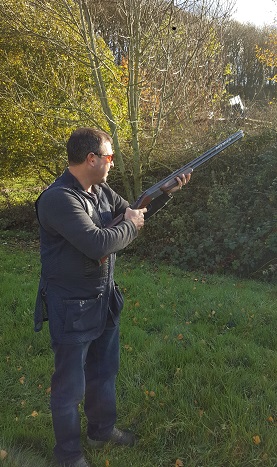 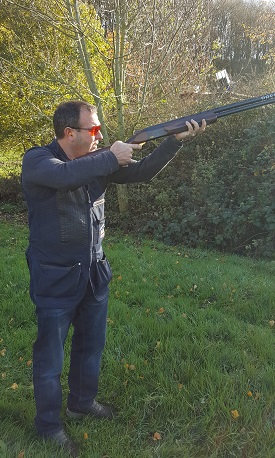 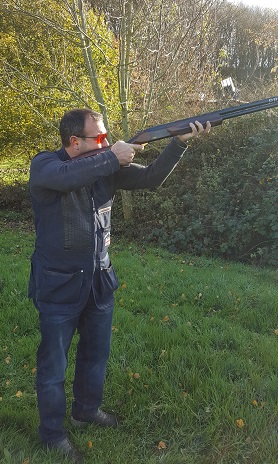 Gun fully mounted, eyes focussed on the target not the gun

In the coming weeks and months we will be looking at the many other aspects of good shooting technique that separate the great Shots from the rest.