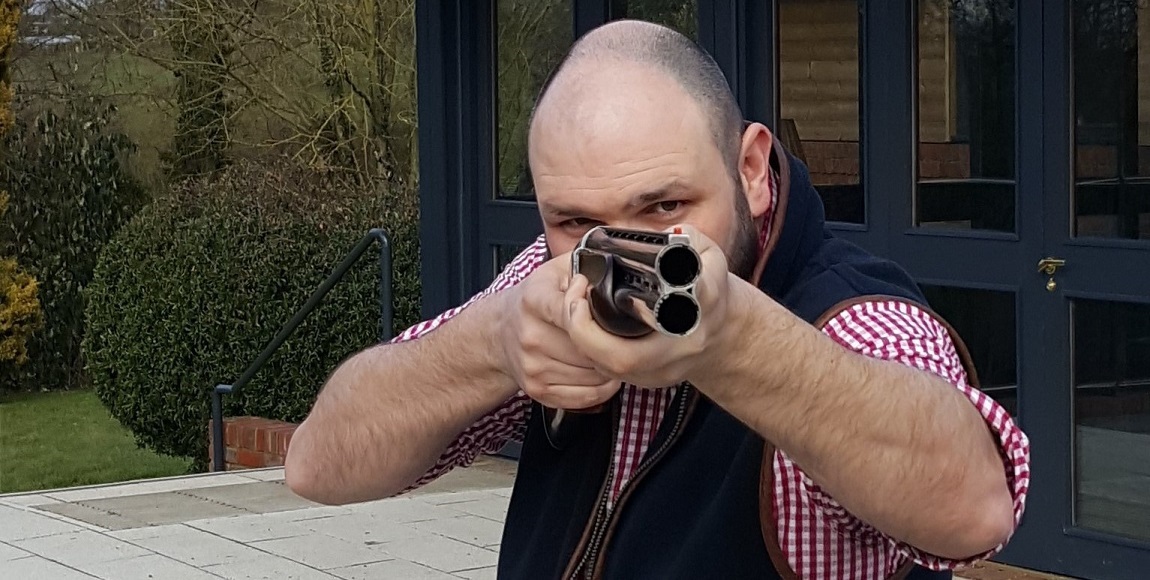 As with most sports shotgun shooting is more straightforward when both eyes do the looking rather than just one. Two eyes see better than one and it is easier to focus the target with two eyes open than with one closed. Keeping two eyes open gives the shooter one less thing to think about and it is more natural.

Unfortunately, for various reasons eyes do not always co-operate with the requirements of shooting. The picture above shows what happens when the controlling or dominant eye is on the wrong side of the shooter. As can be seen in the photo, the left eye is controlling where the gun points, forcing the gun to the left of target. It’s an entirely unconscious error on the part of the shooter that would nevertheless make accurate shooting impossible.

The following statement will possibly make me unpopular with certain people in the coaching world, but that’s too bad. With over 40 years of top level coaching experience, a GB Team and Olympic-level competition background, and the informed agreement of many leading coaches, there is plenty to back it up.

I firmly believe that any coach who insists that his pupils shoot both eyes open regardless of whether it suits them or not is doing them a great disservice. I have encountered right handed shooters who, while demonstrably left eyed, have been advised to shoot both eyes open and aim off several feet to compensate. This means shooting well to the right of straight targets, a long way in front of targets flying left to right, and behind targets flying right to left.

Shooting is difficult enough without this nonsense and it’s impossible to make it work with anything approaching consistency. Given this sort of advice (except where it is intended simply as a one-off demonstration of just how far off line a left eyed shooter actually is) I would immediately change coach.

Probably worse are those who claim that it is possible to retrain the eyes to change eye dominance. How exactly would you go about achieving this? I have heard proponents of this idea suggesting that it might take a year or two to force the change. Who would be willing to take this time out of their shooting careers on the off-chance it might work? I have to say in all my years I have never seen it done and don’t expect to either.

If you have an eye dominance problem you would like resolving you can contact me on pb@totalshooting.com 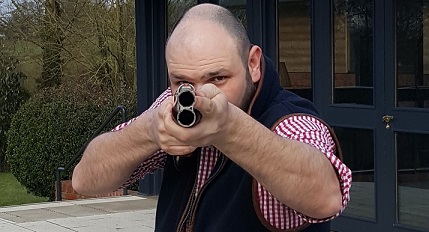 The concept of Dominant Eye is an important one that must be determined at the outset of a shooting career. Quite simply, the Dominant Eye decides how the gun aligns with the target. Shooting from the right shoulder with the right eye totally dominant ensures the gun will always attempt to align precisely with the target. However, should the left eye have any influence then the gun will attempt to align with that eye. With the gun mounted in the right shoulder the gun will always misalign to the left of the target. How much it misaligns depends on the strength of right eye dominance.

This latter point is significant. If the right eye is very strongly dominant then it will likely remain dominant regardless of light conditions or poor backgrounds. However, if it is only mildly dominant then poor light conditions, too much computer work, tv, tiredness etc could cause this dominance to fade and the left eye may begin influencing the alignment process. When this happens shooting becomes erratic, with the gun sometimes aligning with the right eye, sometimes with the left, sometimes in the middle. Chaos rules, and consistent shooting becomes impossible.

Methods for discovering the degree of eye dominance have occupied some coaches for quite a time now. Is a shooter’s eye very dominant or only mildly so, or does it sit somewhere between these two extremes? How do you determine this? New processes are being developed that go well beyond the usual hole-in-the-card or finger pointing methods that have been employed by coaches down the years. While these methods are still valid they cannot determine the degree of eye dominance, and this is important.

For the coach, knowledge of eye dominance strength acts as a predictor of current and future trends for the shooter concerned. A very strong dominant eye is likely to remain that way regardless of shooting conditions or age. A mildly dominant eye is subject to change, and knowing this should influence the advice coach gives when recommending action. There is more to it than this but hopefully the point is made.

The picture on the right is what all coaches hope to see when checking the eye dominance of their client. The dominant eye is on the same side as the shoulder in which the gun is mounted. Correct alignment is assured!

Some Eye Dominance Facts. The following are the collective opinions of coaches down the years:

Please note: an inconvenient eye dominance situation is not an indicator of an underlying health problem. There are F1 drivers, jet fighter pilots, champion snooker players and many top sports people with left, right or central dominance. It makes no difference to their ability to perform their skill. It only affects shotgun shooters (and possibly archers)

Dealing with wrong side dominance 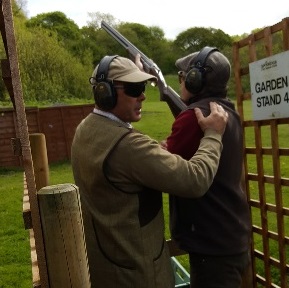 Is it possible to change eye dominance with training?