Gun fitting is often portrayed as something of a mystical art, known only to a select few. The latter is probably true, because few shooting instructors ever get the chance to learn gun fitting from someone who knows what they are talking about. For this reason gun fitting sometimes gets a bad reputation, but this is not the fault of gun fitting, but untrained gun fitters. There's nothing mystical about it, though; just knowledge, experience and a helping of commonsense. An adjustable gun, or try-gun, is required too, but simply owning a try-gun does not make a person a gun fitter.

Although it should have been obvious from the outset, it wasn’t until APSI began to run Gun Fit Courses that it became apparent that the gun fitter also had to be a very competent coach. Without this basic ability gun fitting is not possible. Only an experienced shooting coach can assess good shooting form, and without this skill a valid gun fit cannot be determined.

I learned my gun fitting and coaching skills from a great master, Norman Clarke. Formally of Churchill Shooting School in Crayford in Kent, Norman later became head coach at Holland & Holland Shooting School, arguably the finest school in the world.

As a neophyte instructor at H & H, I was very fortunate right from the outset to be taken under Norman’s wing. It was a massive opportunity and only the celebrated H & H coach, Ken Davies, shared that education.

Gun fitting is somewhat subjective in that it relies on the interpretations of each individual gun fitter as to the finished article. But I would like to think that for a given shooter several first class gun fitters should come up with sets of measurements that do not differ in any substantial way and ideally should be the same.

At the present time gun fitting remains more art form than science, but we are investigating ways to make the process more scientific, more objective than subjective. Watch this space.

How important gun fitting is to you depends on your ambitions. If you are a happy 100-targets-a-month shooter then an off-the peg gun will probably suit you well enough. If, on the other hand, you are shooting 10,000 plus clays a year then you are serious about the sport. You care about performing at your best, and you will be looking for every little advantage to help your scores improve. You definitely need to look into gun fit, as it can give you a significant edge. As an example, when I am working with an Olympic shooter, achieving a perfect gun fit is absolutely paramount from the outset. Serious training with an ill-fitting gun is a waste of money, time and effort.

The Length of the stock:

The Bend or Drop of the stock relative to the top rib:

The Cast. The latter is the set of the stock relative to the rib when viewed from above. It is very rarely dead straight, and viewed from the rear is set either to the right of centre (known as cast-off) or to the left of centre (cast-on). It’s important that these three dimensions are decided in this order.

Also relevant are the size and shape of the grip, the distance from grip to trigger, the balance of the gun, its weight (many guns are too heavy for their intended purpose) and trigger pulls. 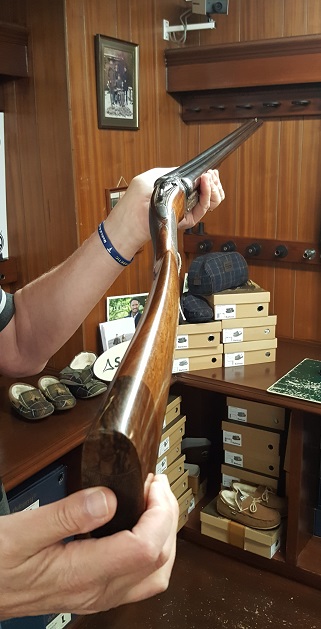 An extreme example of Cast-Off on a side-by-side game gun. This would suit a right handed shooter with a totally dominant left eye.

Most shooters would prefer something less intrusive to cure their eye dominance problem, but I have seen these across eye guns work very effectively.

If you take your shooting seriously then get it fitted by someone who knows what they’re doing.

If you’re a coach with aspirations to be an expert gun fitter then sign up for one of the APSI Gun Fit courses!